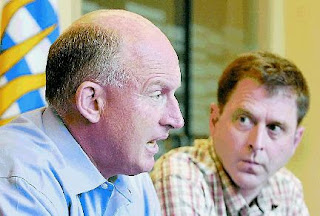 I'm not really concerned with the BC Liberal leadership race as it all looks like more of the same to me. They all supported Campbell and they all supported the HST knowing the electorate were against it. They are all limp fish on crime.

I am disappointed in the Carol James coo but Mike Farnworth or Adrian Dix, that's a tough call. I have seen both in the front lines in the community actively involved in public safety issues. Both nobly stood by Carol James during the dirty deed. Seeing them run against each other is kinda surprising but I certainly don't see it as a toxic mudslinging race. I see it as democracy in action.

I'm slightly concerned that Mike Farnworth support the new seize your car after two drinks law which is overburdening our policing while people are allowed to sell and smoke crack in public. I think that is disproportionate. I'm also concerned federally that Jack Layton made a pledge to reduce the HST as though he supports the HST.

Yet there is a bizarre stereotype that I would like to address. I remember Preston Manning tried to get us to look beyond the left and right and look at the issues. That vision fell when they acted on a typo and changed unite the bright to unite the right and merged with Mulroneyism the very toxic force the set out to reform.

Anyways, let's put our blinders back on and look at the left and right stereotypes as presented in a recent letter to the editor published in the Vancouver Province. The guy goes off on the Marxist name calling and tried to discredit Adrian Dix for his Marxist belief in the redistribution of wealth. Oh my goodness.

I support the Canadian model for medicare and I am not a Marxist. Turning someone away from medical aid because they can't afford it is not the hallmarks of a civilized society in my mind. I believe in less government. I believe in individual rights. I also believe in collective ideals. Those ideals were touched upon in the Irish Proclamation which gave rise to their Declaration of Independence.

OK one of the signers of that proclamation was a Communist, James Connolly. But he was a good guy. He was an idealist who not only gave his life for the vision of the collective but also for individual rights and freedoms the Capitalists wrongfully claim monopoly on.

I remember attending a function where NDP MLA Joan Smallwood spoke. I was kinda skeptical at first but listened to what she had to say. I was surprised to hear her speak out against the human rights violations of Communist China. I thought Marxists turned a blind eye to that as the end justifies the means. Here she was speaking as a New Democrat who did indeed believe in democracy.

In fact her discourse was about the dangers of NAFTA being expanded in the MAI which has since been replaced by TILMA and how those trade agreements go far beyond trade agreements. They give up individual rights and freedoms in a democratic society and threaten our sovereignty as a nation. Free trade is fine but why on earth create a legal document saying it is illegal for any level of government to make a law that inhibits a Corporation's ability to make a profit? The implications are insane.

Under TILMA a corporation could sue the government for making a law that protects the environment because that would inhibit their ability to make a profit. There is much written about these frightening trade agreements but I submit that it is the right, under the lie that they are representing freedom and individual rights who are in reality selling out our freedom and our individual rights to the big corporate machine which is the new beast that has began to enslave mankind.

OK my point is, let's get rid of the stereotypes and talk about the issues. Calling Adrian Dix a Marxist because he is a member of the NDP is no longer believable. You can fool some of the people some of the time but you can't fool all of the people all of the time. Personally, I'm also very interested in the Conservative leadership race in BC. The one that Bill Vandersalm is kick starting.

I still say if we lay the name calling and the false stereotypes aside and look at the issues a Conservative / NDP minority government would find that magical balance between fiscal responsibility and social justice. Wouldn't that be nice?