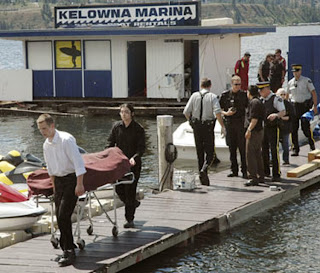 After all this was the high profile case that police allege used the Kelowna Marina as its hub of operations for multi-kilogram cocaine transactions during peak tourist season.

In one of the intercepted phone calls between the two men, Fraser phones Herrick and orders him to “bring some s**t” to “the clubhouse.” With loud music in the background, Fraser tells him the address is 837 Ellis Street, the property known locally as the Hells Angels clubhouse.

There was a body found under the dock there wasn't there? It wasn't just floating in the lake it was under the dock. No foul play is expected? That's strange.

Hey wait a minute. Richard Goldammer owns the clubhouse. He has a bayliner doesn't he? We know Russell Penner does. I wonder if they ever use that Marina?

Posted by Dennis Watson at 2:07 AM