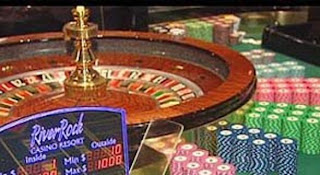 A couple of new stories come to mind and although they are not as significant as David Giles' connection to Dave Revell's cocaine and Russell Penner's meth labs, they are worthy to note. I remember reading two stories about BC casinos the other day and I thought both stories being published on the same day was somewhat ironic.

Someone sent me a link to a news article about money laundering at BC casinos. I kinda have to shake my head and ask if this really surprises anyone? I'm not going to go off on a religious tangent about the evils of gambling but do the math. Organized crime has always been attracted to the industry.

I remember my brother talking about going to Vegas many many years ago and being able to bet on virtually any horse race in the world. He said they had closed circuit television of almost all the various horse races except for one crooked race in Mexico and Exhibition park. He claimed they didn't cover those two races because there was rumours of corruption and fixing. Kinda like the now defunct VSE.

Without debating whether or not any of these gambling casinos are rigged or fixed, no doubt organized crime, which is rampant in BC, would love to use the industry to launder drug money. No real big surprises there. Let's face it, any industry these days would likely love to launder drug money. In fact fining banks for money laundering has become a large source of tax revenue for the US.

We heard a bit about the construction industry in Montreal. Why we've even hear tales of the NYSE being used to launder drug money. The Royal Bank Of Scotland admitted to money laundering. Jersey Shore appears to be full of it.

Then there was the other earth shattering revelation that came out in the paper the same day. The news reported that the BC government is giving huge subsidies to the BC Casinos. The government funding the laundering of drug money? Why is it that I find that humorous and not very surprising? Does anybody really care?