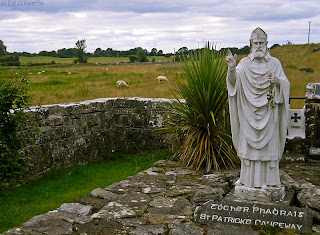 I realize this has nothing to do with the Vancouver gang war or the Hells Angels but I read something recently that was so outrageous it needs a response. I came across it while reading about Hells Angels hit man Yves "Apache" Trudeau.

Seemingly, Trudeau (You can't help but wonder if he was a relation to PM Trudeau) was hired by Frank Peter Ryan, an Irish mobster in Montreal to kill one of his own gang, Hughie McGurnaghan, who apparently screwed him out of drug money.

Ryan led a West End Gang and set up a drug network that extended into the Maritimes and Ontario. Other mobsters became concerned that he controlled too much of the drug trade and wouldn't share it. When warned that a gang member had offended the mafia in Florida, Ryan replied: "Mafia, pafia. If there's a war, we've got the IRA."

Hold the door... a drug dealer boasting that he has the support of the IRA? Now I'm really gonna lose it. The IRA started off as a group of freedom fighters following the example of the founding fathers of the Declaration of Independence. They established their own eloquent declaration in the Irish Proclamation which was submitted to the world at the Easter Uprising in 1916.

Bobby Sands, James Connolly and Micheal Collins did not give up their lives so some punk ass bitch could sell drugs.

Back in the day the IRA had two factions, the Provos and the Sticks. The Provisional IRA or PIRA were Republican followers of the American Dream. The Sticks or INLA were Communists who saw Russia as Big Brother. I always found it amusing to see so many Russian airplanes flying into the Shannon airport back in the late /80's. The IRA was getting support from Russia and America at the same time.

Now we have something called the Real IRA which isn't the Real IRA at all. They're just another splinter group that want division and violence. Anyways, my point is that the IRA started off as a good thing. They were freedom fighters fighting for self rule. Unfortunately in time corruption entered both the IRA and the UDA tainting the original cause.

I was in Dublin when the IRA had kidnapped a dentist and sent his fingers to his family with a ransom note. That was a deranged criminal act and had nothing to do with fighting for freedom. The end does not justify the means.

I was in Northern Ireland shortly after a reporter I believe named John McMahon was blown up for airing a documentary about how the IRA and the UDA had become mere extortion rackets demanding protection money threatening construction sites with accidents if they didn't pay.

The documentary claimed that alcohol stolen by the IRA from a hijacked truck was being served in Protestant UDA bars. Shortly after the documentary aired, the reporter was blown up. I'm told that not long after that, the crack plague hit Belfast and you guessed it, the IRA and the UDA took it over.

That was not the original plan. The Irish Proclamation declares: "We place the cause of the Irish Republic under the protection of the Most High God. Whose blessing we invoke upon our arms, and we pray that no one who serves that cause will dishonour it by cowardice, in humanity, or rapine. In this supreme hour the Irish nation must, by its valour and discipline and by the readiness of its children to sacrifice themselves for the common good, prove itself worthy of the august destiny to which it is called." 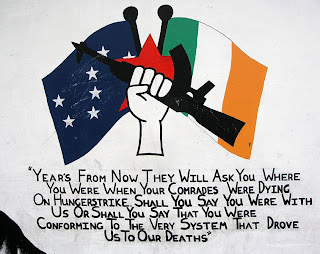