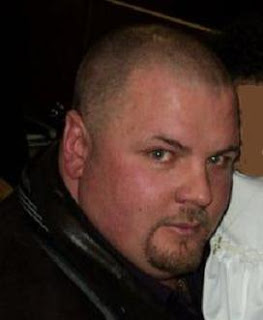 Anyways, Vagos sign him up to bring the group to Canada. Well Ontario at least. Only Vagos are friends with the Mongols and are waring with the Hells Angels in Cali. They must not have read Sean's resume. They call him Chris Brown. I think it's because they think he's a bitch.

Get this, Vagos' logo is of Loki, the Norse god of mischief. It kinda looks like a demon but that is the same name Hells Angel Sean Wofle had tattooed on his stomach. Only Meryl Norman Wolfe's tattoo looks more like the name Lola.

The Rock Machine are trying to distance themselves from accusations of drug dealing which is good. However, when someone writes a letter denying they sell drugs then signs it as a 1%er that makes the whole letter hard to believe. "I don't sell drugs but I'm a criminal."

When I was young the old timers here used to say HD 1%. HD standing for Harley Davidson, 1% standing for cream of the crop - the elite. Not everyone rides a Harley. Now we find out the historical origin of the term. The AMA was saying 99% of the people out there who ride motorcycles are law biding citizens. 1% of the bikers out there are deranged criminals. After that the Hells Angels started to proudly wear 1% patches claiming they are the 1% of society who are deranged criminals.

If we want to save the MC in Canada we need to separate ourselves from the crack dealers and the murders not just say we have. We need to walk the walk not just talk the talk. That would include avoiding the term OMG. MC is fine. The courts should ban the HAs from using the term MC. Let them have their patch. Just make them remove MC from it. OMG also implies criminal activity.

I still say the Buffalo Soldiers MC is the example to follow. They say right on their web site we are not a 1%er club. Somehow when they say that, I believe them. They're just a good group of motorcycle enthusiasts. That's the way it's supposed to be.