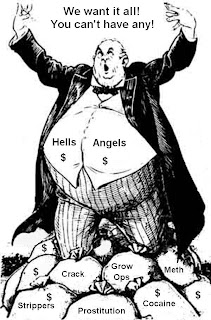 I recognize that people are always going to sell drugs and that the freedom to chose is an important part of the plan that brought us here so to speak. Yet they say pride cometh before the fall. So we saw with Rome as well as with Israel right before the Babylonian captivity.

The problem we see in BC is greed. A lot of people out there are really struggling trying to make ends meet to support their family. The temptation to launder money or get involved in the drug trade is immense. Yet greed takes it to the next level.

Selling pot isn't good enough. They want that new SUV or Bayliner boat so they have to trade all the pot for cocaine and turn it into crack. There is a difference between pot and crack or meth. A big difference.

No one gets an uncontrollable urge to do a home invasion and attack a senior for five dollars to buy another blunt but they do for crack. We have seen it happen before. Profiting from crack is profiting from the crime the crack heads do to pay for the drug. That drains society.

That is why the Hells Angels are killing people to control that drug trade here. It's all about greed. I don't agree with the government seizing houses for grow ops. I think that over steps. They should be seizing assets from the likes of David Giles who made so much money from Revell. They should seize the assets of the Hells Angels in Kelowna who profit from those meth labs. That is the proceeds of crime.

Money laundering doesn't just happen in Casinos. It also happens in Real Estate. Those are the assets that should be seized. People profiting from crack or meth not someone running a grow op of pot.

If I run a grow op in my home, which I don't, it's no one else's business. Except for hydro. If I steal hydro that is their business. If I run a grow I can pay for the hydro. Running a grow is not nearly as dangerous to the public as running a meth lab is. That is a concern for public safety.

The problem is if I run a grow op the Hells Angels come in and say I have to run it for them. No I don't. That kind of greed will fall. Mark my word.