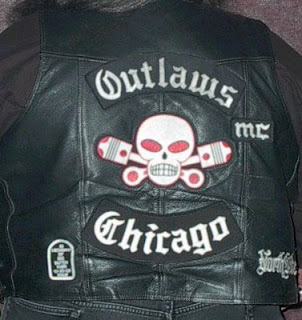 Honourable mention goes to the Outlaws MC. Separate and apart from the Hells Angels. Although they have had criminal convictions, most appear to be weapons and assault charges resulting from their beef with the HAs. It does not appear that their primary and exclusive reason for existence it to take over the drug trade with violence.

It does not appear that their main purpose is to sell crack or meth and pimp out women. Turns out they're from Chicago which is a noble point of origin. Word is they're poised to take Ontario which in my opinion would be a good thing.

I clearly don't support a war for the sole purpose of taking over the crack and meth trade. However, since the police are paid by the public and in a democratic society their mandate is driven by the public who elect federal, provincial and municipal governments, we need to prioritize the enforcement and punishment of crime.

Likewise, using police resources which come from tax dollars, to eliminate all the Hells Angels rivals is suspicious if not counter productive. Let them come. If they are caught selling crack or meth then charge them accordingly but don't ban them from coming.

Take note that their logo is of a skull and pistons crossed like a pirate's flag. More likely symbolic of a V twin. Theirs isn't a devil's skull and they don't use the number 666. Interesting. Being an outlaw doesn't necessarily mean you sell crack. Robin Hood was considered an outlaw. In our day Julian Assange would be considered an outlaw simply for telling the truth.

The Outlaws MC wasn't just created a few years ago either. They were created in 1935. The Hells Angels claim they started in 1948. In 1960 the A.M.A. American Motorcycle Association, that supervises all official races in the USA - banned the word Outlaws from all race clothing. There for all racing club members wore the sign OMC on their outfits till 1963.

In 1963 the Outlaws became an official member of the 1%er Brotherhood of Clubs, making it the first true 1%er Club east of the Mississippi. That would be before the Hells Angels who claim ownership of the term. Back then the term 1%er meant the 1% that didn't fit in or conform. It's somewhat ironic that the Hells Angels and all of their drug dealing puppet clubs would use the term. They're a lot more than 1% of them. They all bow down and bend over for the Hells Angels. If someone was a true 1%er, they wouldn't conform to HA demands. ADIOS.