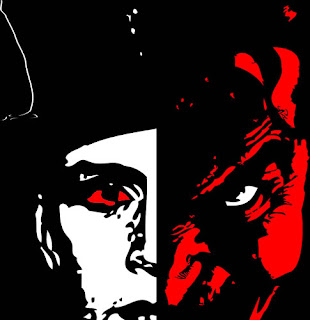 Seemingly the break in the Randy Mersereau murder made story of the year in Truro, Nova Scotia. Someone wrote me and said:

"The part people don't talk about - the families of those accused murderous men and other like them. The wives (and the children) who were in relationships with these people. How can a man have children and a wife - go to work, earn a living... take family trips to the beach and at the same time live a double life and hide this part of himself? Not all gangsters (or HA) are out there and visible - some are "closet associates/friends" and keep the knowledge and lifestyle hidden from their family. It happens. And it destroys the lives of those who once loved them - and leaves a horrid legacy and a name to their children that is both sad and hurtful."

They thought it might be a worthwhile topic on my blog. Indeed it's a good point. Not everyone knows about the dark deeds of the Hells Angels and their associates. Sometimes they even keep their double life secret from family members. Kinda like that Colonel Nutbar case. Here was a guy who rose up in the ranks of the military and was secretly breaking into woman's homes and stealing their underwear and eventually committing rape and murder. No one suspected him. Not even his wife.

I do agree many Hells Angels and associates keep their double life secret even from their family. Some people smile when asked about the Hells Angels involvement in drugs and prostitution and say they don't ask about that stuff but others really aren't aware of it. They believe the PR and are kept in the dark to perpetuate it.

I met a guy who spoke about meeting a group of Hells Angels on a flight to Vancouver from Amsterdam. They boarded the flight in suits and ties but when the flight took off they took off their suits and ties only to reveal their Hells Angels support T-Shirts. They then wrecked havoc on the plane and acted like a bunch of spoilt brats trying to scare and intimidate people. Then when the plane was ready to land they put back on their suits and ties and met their wives and family as though nothing had happened.