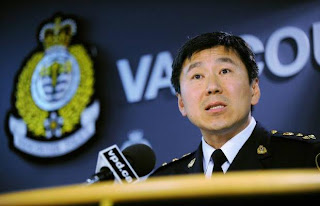 Ian Mulgrew wrote an editorial in the Vancouver Sun yesterday that hit the nail on the head. The Kelowna RCMP incident underscores the need for a civilian agency. It doesn't underscore the need for a Regional police force. Delta, Abbotsford, New Westminster and the VPD have as much excessive force problems as the RCMP. What we need is a civil agency to oversea the complaint process and make all police forces publicly accountable. Wouldn't that be nice?

These extreme and intrusive laws were introduced by the provincial government with the lowest approval rating in the country. That government should not be in charge of a Regional Police force. Yes a Regional Police force works fine in Ontario. BC is different. We have a drunk driver for Premier that introduced silly drinking and driving laws to overcompensate for his own misdeeds. Wait a minute, I thought that guy resigned finally or was that just a dream?