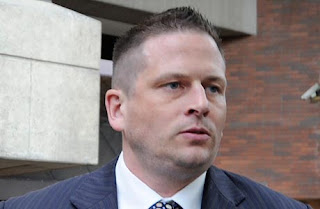 OK another set of related news articles has my blood boiling. The first is the front page of today's (yesterday's) Vancouver Province. It was an article about the trial of the New Westminster cop who assaulted the newspaper delivery man in Vancouver along with two of his friends. What a farce.

The article goes off about some absurd legal debate surrounding the case that clearly points to obscurity. I'm not upset with the reporter. Just the lawyers and the judicial system. A West Van cop got drunk assaulted and robbed a man in a completely unprovoked attack. He was off duty. He called his drinking buddies for help and they leave the bar to assist him. In steps New Westminster Const. Jeffrey Klassen.

Klassen jumps in to assist West Vancouver Const. Griffin Gillan beat up the Newspaper delivery man while Gillan, who has already plead guilty to assault, abused the victim with racial slurs. "Why are you beating me?" "Because we don't like brown people" "Someone call the police" "We are the police."

Defence lawyer Dwight Stewart said Klassen was acting within his rights as an off-duty officer and is protected by the Police Act. Protected by the police act?!!!

"I would argue it wouldn't make any difference if Const. Klassen pulled up in a police car [rather than a cab]," Stewart said. "This is a use-of-force to prevent an offence."

No this is the problem. Off duty cops who think they are God and can become on duty cops at the snap of a finger at will. In this case to assault and rob someone in an unprovoked attack.

Dingledorf Dwight is right about one thing, it really doesn't matter if his client pulled up in a police car or a cab. What he did was wrong and if he did it on duty instead of off duty it would still have been assault and he still would not be protected by the Police Act. The Police Act does not empower off duty or on duty police officers to break the law and assault people while abusing them with racial slurs.

This is their use of force instructor for God's sake. Several city workers testified they saw Klassen punching Khan on the back of the head while on top of him. Klassen testified he was only slapping and poking Khan while yelling arrest orders. He is a liar as well as a drunk who helped one of his off duty pals rob and assault someone in an unprovoked attack.

Arrest orders? He has no authority to arrest him other than civilian authority. To make a citizen's arrest he has to witness the person commit a crime which he did not do because the victim had not committed a crime. It was an unprovoked attack.

Several witnesses said they saw Klassen punching Khan on the back of the head while he was on top of him. We don't need video footage. This guy should not be the use of force instructor any more. Period. There should be no debate on that matter. This case clearly shows why a civil agency is needed to hear police complaints and why the current private members bill needs to be amened so that it applies to all police forces in BC not just the RCMP.

They need to relieve Klassen of his use of force training duties immediately and contract out the retired VPD Ninja John Mckay until they find a suitable replacement. John McKay would never sanction that let alone teach that. He would say if someone said I'm going to kick your ass and started moving towards you in an aggressive manner you have the right to defend yourself. He would never say you have the right to assault and rob someone in an unprovoked attack. Get a grip.

So we have two problems on the table. Abusing your authority as a police officer while off duty to commit a crime and bragging about drinking excessively ten or twenty drinks as though that someone excuses the conduct and the commission of crime. Which ties into our next article in the same edition of the Vancouver Province.

Assault charges were dropped against a Surrey RCMP Officer after he assaulted a fellow off duty officer in a bar for calling him a fag. What a bunch of freakin kids. Back in the day, the RCMP had this unscathed Dudly Do Right persona that was reinforced in Paul Gross' Due South series. These clowns are tarnishing the image and diminishing us as Canadians. We need a civilian agency to restore dignity to the force(s).

Cops like to go to the bar, get drunk and get in fights. Great. Maybe they should be held accountable because we can clearly see what kind of bold faced arrogance surfaces when they are not publicly accountable.

Oh but wait, I missed one. Another Kelowna resident complained about recent police brutality and their excessive use of force. Clearly these guys need to be retrained. Clearly John McKay is the man for the job because it is urgent.

Oh but wait, here's yet ANOTHER. Two Vancouver police officers are seeking to quash a decision by the police complaint commissioner to hold a hearing into their conduct during an alleged excessive-force case. These are the guys that went to the wrong door and gave the boots to the wrong person. These are the same two cops who returned to the guy's house after they beat the tar out of him and ask him not to file a complaint.

The Delta Police investigation was a complete farce so police complaint commissioner Stan Lowe ordered a hearing. But in a petition filed in B.C. Supreme Court, the two officers say that Lowe did not have the authority to appoint retired Supreme Court judge Bruce Preston as an adjudicator to hear the matter.

This isn't just one or two cases, it has become a plague of absurdity which has swept across every police force in the province. A Regional police force will not solve it. A civilian agency has become essential. Public accountability in the only answer. The police officers who arrogantly refuse public accountability need to be fired while the others than are willing to embrace it need to be retrained. That has become very clear. Canadian dignity and self respect demand it. That is the Canadian model. 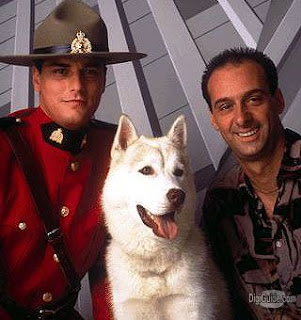