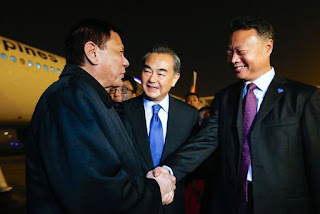 Rodrigo Duterte, the raging lunatic who has told citizens to shoot anyone they claim is a drug dealer on sight has officially embraced Communist China. After denouncing the US for not supporting his complete abandonment of civl liberty he has boldly endorsed Communism. Big surprise. This is what happens when you elect a dictator. He embraces dictatorships.

He has given up Scarborough Shoal, which China seized from the Philippines in 2012 and sparked demonstrations by Filipinos around the world. Duterte says "We cannot win that. We can’t beat China.” So instead he wants to join them. The question now remains are his fellow Filipinos prepared for their nation to become a Comunist satellite?

Say hello to political prisoners and organ harvesting. Anything to make a buck.