Overdose fatalities continue to rise in BC 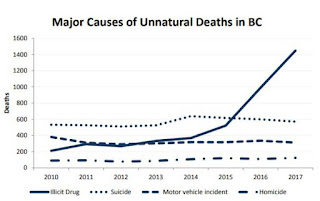 CBC is reporting that "Suspected overdose deaths spiked again in March, reaching the province's second highest monthly total to date, according to the B.C. Coroners Service. A total of 161 people are believed to have died from drug overdoses in March, a 58 per cent increase over the month before." Global is reporting that "The deaths represent a 24 per cent increase over March 2017, when 130 people died from illicit drug overdoses."

Obviously the lethal injection sites are not working. They have increased fatalities not decreased them. The reason is two fold. First is the obvious. Harm Promotion increases addiction like a forest fire. Addicts in Surrey want rehab but they can't get it because most of the detox centres in Surrey are flop houses for addicts to use drugs. Police won't even arrest the drug dealers that sell drugs at detox centres. The other reason was explained by former VPD officer John McKay.

When the city sets up a lethal injection site where addicts can shoot up and smoke crack without getting arrested, the police create a buffer zone around it where they refuse to enforce the law and arrest the drug dealers. That creates a black hole of lawlessness around the facility that attracts addicts from all over the country and creates more addicts faster than we can inject them with Naloxone so they can keep filling the drug dealers pockets. We are culpable in those fatalities through our harm promotion and our endorsement of lawlessness and organized crime. That is not social justice. It is mass murder. 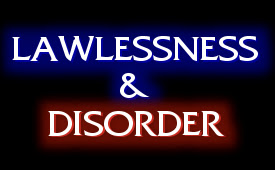 CBC is reporting that "Inmates at two federal prisons who use injection drugs will have access to clean syringes beginning in June, with the Correctional Service of Canada planning to roll out the service at other institutions next year." WTF?! This country is so f*cked up. Inmates are not supposed to have access to drugs in prison. We are supposed to uphold the law not break it.