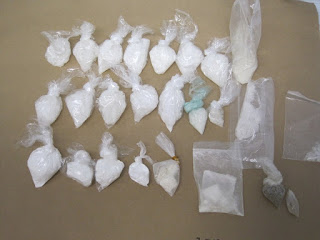 News 1130 is reporting that "One man has been arrested and released following a drug raid that happened in one of Surrey’s most vulnerable neighbourhoods. Mounties were called out to check on a possible drug packaging site at a home on University Drive near 135A Street after being tipped off from BC Bailiffs. They got a warrant and once inside found a lot of drugs. Multiple packaged doses of suspected methamphetamine, cocaine, heroin and fentanyl. Numerous items used in the processing and packaging of drugs Firearm ammunition of various calibers."

“It’s always important for us to be able to locate drug trafficking operations, in particular, we know that fentanyl is very harmful and we’re very pleased with the results of this investigation,” explains RCMP Cpl. Elenore Sturko. Is he not afraid of getting struck by lightning for making such a hypocritical statement? The drug trafficking is happening right under their nose. They are providing the fentanyl dealers police protection on the Surrey Strip.

They are watching is come from Shakerz and they are watching it from their new HQ beside the lethal injection site between the Front Room and the Lookout homeless shelters which are not homeless shelters they are simply drug houses. The fraud is well know to local police because they watch it unfold right before their eyes every day. They are criminally culpable in the sale of fentanyl on the Surrey Strip because they watch it happen and refuse to arrest the dealers they provide police protection for. If the BC Bailiffs didn't report it, they wouldn't have made the bust.