Hamilton cop sentenced to 12 and a half years 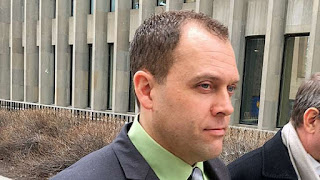 CBC is reporting that "Craig Ruthowsky, a Hamilton cop who was found guilty in a pay-for-protection scheme with a crew of Hamilton drug dealers, has been sentenced to 12-and-a-half years in a federal penitentiary. Justice Robert Clark handed down his ruling in Superior Court in Toronto Tuesday. The sentence includes six months credit for time served. Ruthowsky was also ordered to pay a $250,000 fine — the amount Clark said Ruthowsky took in bribes. If Ruthowsky doesn't pay that fine within a year, three more years are tacked on to his sentence. "

This is in addition to the allegations of police corruption in Hamilton by Paul Manning who was an under cover Hamilton police officer. Court documents filed by Manning claim that "Hamilton police officers fraudulently claimed reward money from Crime Stoppers, and others were involved in “ripping off” drug dealers and marijuana grow operations. Two officers have been ‘on the take’ since the ’80s. They would pay reward money to a relative and then split the proceeds."

"A senior Hamilton officer sold information about the investigation into the unsolved 1998 murders of criminal lawyer Lynn Gilbank and her husband, Fred. It’s believed Gilbank may have been the subject of a gangland hit at her Ancaster home. Several Hamilton police officers have ties to organized crime and the Hells Angels. Manning also names a Toronto officer he alleges was selling guns to Toronto gang members."

This is in addition to former Niagara Regional Police constable Frank Dean Rudge and Montreal cop Benoît Roberge who were both accused of leaking information to the Hells Angels. Or the saga of police corruption in a Toronto drug squad reported in the Toronto Star. 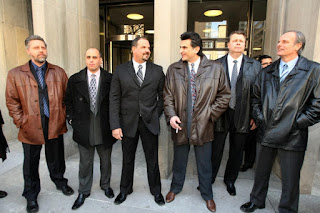 This is why Post Media News mergers are bad for business. Harold Munro doesn't report police corruption like the independent newspapers do. He runs interference for the cops instead. Harold Munro never reported on Kamloops cop Randi Love who was caught selling cocaine on duty. That was local rock star Tim Petruk. The one who brought us the story of Peter Leask in Kamloops when Harold Monro folded like a cheap tent.

The Vancouver Sun didn't report on the Abbotsford cop caught on video putting drug money in his sock during a police raid. That was the Abby news and Global. The Vancouver sun did put out few full page adds saying we can trust them. Not. This is why obsessing over seizing the proceeds for crime without addressing street level drug trafficking is the wrong road to take.

The New York Model confronted police corruption and targeted street level drug trafficking. BC is worse than Hamilton because they keep letting career criminals like Blaze and Len Pelletier off in exchange for tainted intel. The 44 kilos of pig deworming cutting agent Lenny was caught with is specifically used to cut crack. Lenny was supplying Surrey crack shacks during the peak of the Surrey House of Horrors. He and Blaze are the root of the problem. No justice, no peace.