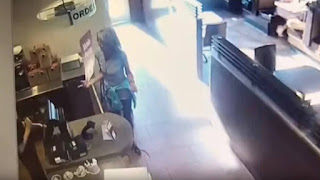 The Abbotsford News is reporting that "A woman who flung her own feces at Tim Hortons workers in Langley was detained by police Monday evening. The incident took place at about 6:15 p.m. at the Douglas Crescent Tim Hortons in downtown Langley City. On a video of security footage posted to YouTube, a woman can be seen angrily gesturing at staff. The staff appear to be asking her to leave. The woman then defecated on the floor and flung the feces at staff members behind the counter."

CBC is reporting that the woman is known to the police in that area. "That area" is a scuzzy part of Langley filled with drug addicts. This is why harm promotion is not working. It creates a tsunami of addicts that have absolutely no regard for anyone else other than themselves.