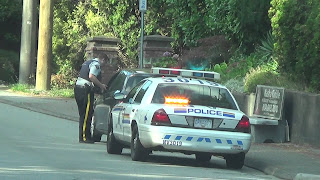 The Peacearch News is reporting that "A Comox Valley RCMP officer is facing a single count of assault stemming from an incident during a traffic stop in Comox in November 2017." Apparently during a routine traffic stop the citizen started to record the conversation which angered the officer and caused him to pull the citizen out of the car onto the ground and arrested him for obstruction. It is no secret that police don't like to be filmed or recorded but it is not unlawful to do so. We need more accountability not less.