This one is fishy as f*ck. The Independent is reporting that "The Israeli military has claimed Iranian forces in Syria have fired about 20 rockets at its positions in the Golan Heights. Some of the projectiles were intercepted and damage on the Israeli side was minimal, it said, adding that there were no casualties." The source is the Israeli military. The same group responsible for the false flag attack on the USS Liberty.

CNN is reporting that "Netanyahu says Iran crossed a red line after Israel pounds Iranian targets in Syria. The source is Prime Minister Benjamin Netanyahu who sidestepped corruption charges by threatening war with Iran. Lest we forget that Cyrus the great was the one that set the Jews free after the Babylonian captivity. Cyrus was from Iran.

Lest we forget that it was the British and the Americans that overthrew democracy in Iran under Operation Ajax and implemented Islamic extremism there.

This latest rocket attack fails the test of believably just like the recent false flag chemical weapon attack. Assad is winning. He has no reason to inflame the west and justify their involvement. Israel and America want to over throw Assad because he is close with Russia. If you don't want to accept refuges into your country then stop creating them. The people like Assad. We need to respect their democratic will and stop this ridiculous meddling. Jerusalem O Jerusalem... 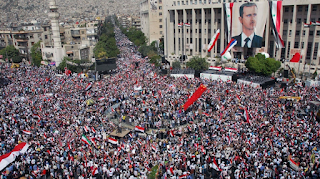