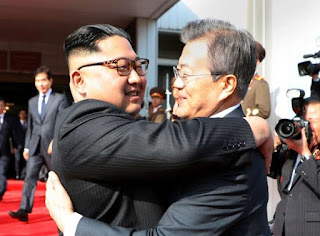 CBC is reporting that "North Korean Leader Kim Jong-un and South Korean President Moon Jae-in met for the second time in a month on Saturday to discuss carrying out the peace commitments they reached in their first summit, as well as Kim's potential meeting with U.S. President Donald Trump, Moon's office said." Giving Trump a Nobel Peace Prize for brokering this treaty is a bit of a stretch. Moon Jae is the real hero in this scenario.

Kim is making progress. The Agency is holding Trump back. As always.