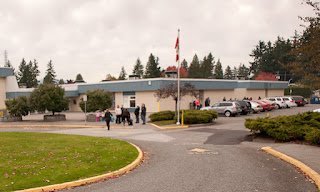 The Peacearch News is reporting that "According to a Delta Police Department release, at approximately 9:45 p.m., officers responded to reports of shots fired in the 8800-block of Delvista Drive near Brooke Elementary School. When police arrived they located two victims. Both had been shot and were taken to hospital where they were treated for non-life threatening injuries."