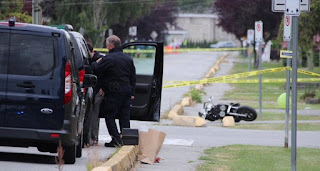 The Peacearch News is reporting that "Reports say that a motorcycle rider crashed in Richmond after being shot at early Sunday morning. The man was reportedly riding along Saunders Avenue near No. 4 Road at about 2:30 a.m. Police remained at the scene throughout the day." The victim is in his 30's and is well known to the police. Then why hasn't he been named?

Posted by Dennis Watson at 8:59 PM