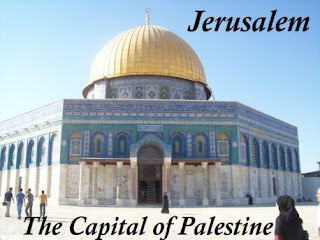 Some pretty conflicting and sensational headlines in the news concerning Gaza and Israel. The most recent violence seems to revolve around the fact that the Americans moved their embassy from Tel Aviv to Jerusalem and the 70th anniversary of the creation of the State of Israel. This insanity is so toxic I hesitate to comment yet the absurdity of it all compelss me.

First the obvious. If the Americans want to move their embassy from Tel Aviv to Jerusalem, Haifa or Tuktoyaktuk, who cares? No really, who cares where they put their embassy? It just doesn't matter. Logically they will also put the US embassy for the Palestinian authority in Jerusalem as well. Everyone is freaking out over the declaration that Jerusalem is the capital of Israel. Who cares? No really. Who cares? Palestinians in Israel now have passports. They are residents of the Palestinian National Authority. This is progress.

The Old City of Jerusalem is divided into four quarters, Jewish, Muslim, Christian and Armenian. There is no reason the City of Jerusalem can't be the capital of Israel and the Palestinian National Authority as well. It actually makes sense since both parties consider the city holy.

I also want to be clear that Palestinians are not the original inhabitants of Gaza. The Philistines are. They were conquered by Egypt under Ramses. The current residents of Gaza are the most politically extreme and have the least hereditary claim to the land. Israel doens't want Gaza. They just want Gaza to leave them alone which has proven to be very problematic.

Yesterday Gaza hosted a violent protest and stormed the border with Israel. Israel fired on the mob that was storming their land. In Belfast they used to refer to Russia as Big Brother. As I have said before, Big Brother isn't always right but Big Brother isn't always wrong either. Likewise with Israel. Israel is not always right but they are not always wrong either. The Jews have a historical and hereditary claim on part of Palestine. They just don't have an exclusive right to it which makes peace in the city of peace very problematic indeed.

As Ramadan begins it is important for us to all respect religious and cultural diversity. God is not a respecter of persons. How we treat each other is more important that what he profess to believe. Actions always speak louder than words. Hypocrisy always smells bad.

I was shocked and kept saying, this is Arabic? This is Muslim? She kept nodding and said yes. She said she got it at Mecca in Saudi Arabia. I was fascinated. I had no idea two very different cultures could possibly be so similar. As I've previously mentioned my neighbors are Muslims from Syria. They are wonderful. Their children are adorable. Diversity makes us strong.