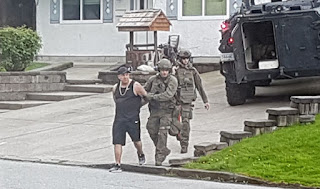 The Maple Ridge Pitt Meadows News reported that Kenneth Lavallee was arrested with assistance from the Abbotsford Police Emergency Response Team on March 21st 2018. Well, they just arrested him again in Maple Ridge. One blog reader claims ERT set off a few percussion grenades and had a loudspeaker asking "KENNETH LAVALLEE" to "COME OUT OF THE HOUSE IT IS SURROUNDED". They included a few pictures of the event. 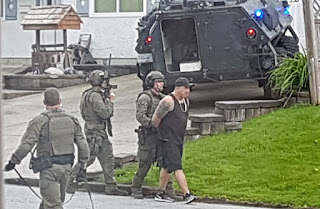 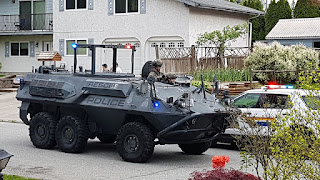 Why can't they drive that thing down the Surrey strip and arrest the drug dealers selling fentanyl?

In 2012 Kenneth Lavallee, 41, pleaded guilty to the May 2009 abduction of Robert Chartwell, who sold and delivered drugs for him. At the time he had a 20 year criminal history.