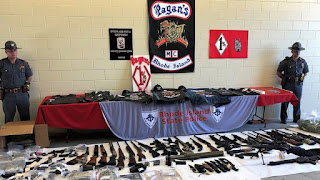 Fox News is reporting that "Authorities in Rhode Island on Wednesday arrested 50 people associated with two rival motorcycle clubs believed to be involved in a turf war and seized 53 illegal guns, including a rocket launcher, and a large amount of marijuana, crack, cocaine and heroin. State Police identified the two gangs as the Pagans and Kryptmen, who were dubbed “some of the most violent” gangs in the country, the Providence Journal reported. The gangs allegedly have a history of gun and drug trafficking, kidnapping, murder and robbery.

Robbery and large quantities of crack cocaine. What's wrong with that picture? It doesn't say what the quantiy of drugs were seized and who had them. They're just rounding everyone up. "The Aging Rebel believes that seven of the defendants belong to a fledgling Pagans chapter and four defendants belong to the Kryptmen." ATF busting their rivals again. Nice Belfast Special: 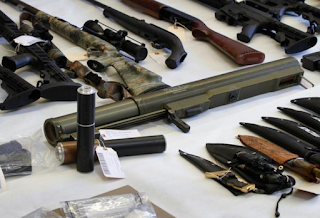 The ATF were probably the ones that sold it to them. "ATF stop ATF plot." It all sounds familiar.