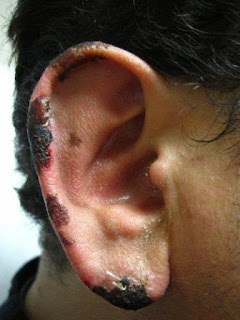 Everyone knows that cocaine is stepped on or cut with other chemicals to stretch it allowing the drug dealers to make more money. One of the common cutting agents for cocaine and now crack is Levamisole. Levamisole is used to deworm cattle. However in humans it suppresses the immune system and creates flesh eating disease. ABC News posted some pictures.

WUSA 9 claims that the Journal of the American Academy of Dermatology profiles six cocaine users who have developed patches of rotting flesh on their ears, nose, and in some cases, their entire body. The study concludes that it's caused by using cocaine that's been cut with the drug, Levamisole. One anonymous commenter on another blog claimed Levamisole is commonly used in Vancouver for cutting crack because it is hard to detect and doubles their money.

The blog reader who sent me these links was a long time former drug user who said people need to know how bad this stuff is. Indeed they do. This is yet another reason we shouldn’t be handing out free crack pipes. It is a heath violation. We might as well be handing out free Dixie cups for people to drink Drano so they don’t catch a cold from sharing a Dixie cup. Drinking Drano is worse that getting a cold. Crystal meth is made from Drano. In Surrey addicts are throwing crack pipes everywhere including in stores where people buy food along with their used needles because they know the government will give them a new one. That is a public health hazard.