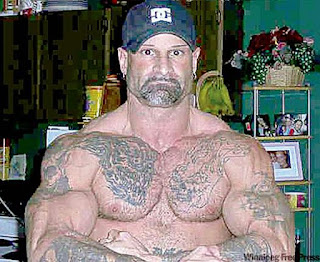 Joseph Strachan from the Rock Machine in Winnipeg was sentenced to nine years after pleading guilty to drug trafficking and drug related charges. The Winnipeg Free Press is still referring to him as the President on the Manitoba Nomads. Someone claimed he’s no longer a member in good standing. Either way, he’ll be out of the game for a while.

Strachan used to be a Hells Angels associate but crossed over with Billy when the Hells Angels shot their own guy from LHS. He was at the Outlaws 35th anniversary in Ottawa last summer. These charges stem from that recent police sting where they arrested most of the chapter back in January. John Adam Curwin received a 9 1/2 year sentence in April after pleading guilty to gun and drug trafficking charges.