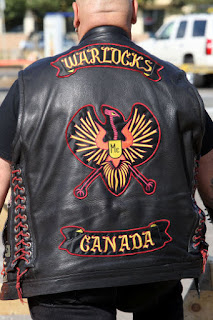 Speaking of the Hells Angels white supremacist puppets in Fort McMurray called the Syndicate, the Warlocks MC made the news after they got in a bar fight with the Syndicate in Fort McMurray. I guess they’re rivals. Before we cheer we need to realize they’re just more of the same. George Sutherland and Kristian MacEachern have both been charged with uttering threats and both face drug trafficking charges. MacEachern is believed to be the leader of the Syndicate.

The Warlocks seemingly started in Florida and have chapters in Melbourne Australia and now in Alberta. Although they claim military origin and claim to support the troops, once again their conduct is in opposition to that mission statement.

They start off by calling themselves the Evil crew. Kinda like AC/DC’s song that says if you’re evil you’re a friend of mine which really makes no sense whatsoever. That’s like the Anarchy bikers rule book. When the Hells Angels murdered one of their own guys from LHS to let the Ontario Village Idiots take over the drug trade in Thompson, Manitoba - that was evil. Murder and betrayal is evil. But AC/DC said if you’re evil you’re a friend of mine. But if you murder your friends for greed how can I trust you to be my friend? It’s all very problematic so it is. Hitler was evil. We fought Hitler in the war. How can you support the troops if Hitler is your friend? All those confederate flags are a bit much for me.

It’s the same old, posting pictures of half naked women on motorcycles. Tell me are any of you guys married or have kids? Are any of you ever going to grow up? It can’t be strippers and blow forever. Somewhere along the line you’re supposed to grow up, have a family and become a trustworthy husband and father. Bar fights and MC patches. Really? How old are you? You’re not kids any more. A mid life crisis doesn’t mean you revert to childhood. 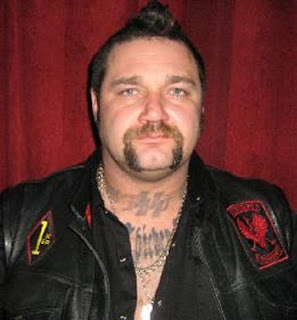 The Warlocks even have their own lockdown page supporting members who are in prison for various offenses they were "falsely" convicted of like Christopher Hamm. He’s a member of the Warlocks and is recognized on their Lockdown page along with several other winners. Bragging about members in jail is kinda dumb. Chris has Nazi lightening bolts on his neck. That's like pissing on a good soldiers grave.

I suppose it’s not as bad as Sonny Barger recognizing Otis Garret on his Big House Crew page. Otis was convicted of murdering Margo Compton and her twin seven year old daughters after she testified against him for running a Hells Angels prostitution ring in San Francisco called the Love Nest. Pimps and baby killers, those aren’t my kind of role models. 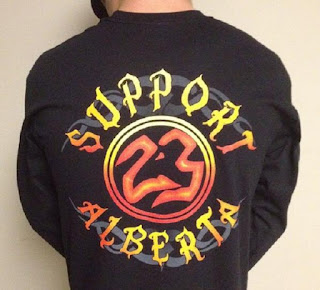