The murder of Michael Hastings

Michael Hastings was an award wining investigative journalist who wrote for the Rolling Stone magazine. In 2010 one of his hard hitting articles resulted in the resignation of General Stanley McChrystal who was the NATO commander serving in Afghanistan. June 18 2013 Michael Hastings died in a fiery car crash. We can talk about the suspicious nature of the crash all we want. Clearly if someone was trying to kill him they could have tampered with his car and put a bomb in it.

The indisputable fact is that he sent out an e-mail to numerous contacts hours before his death saying he was tipped off to an FBI investigation and that any of his journalistic sources should seek legal representation before answering any questions which still is a constitutional right. Knock on wood.

We can spend hours arguing about the suspicious nature of his death. To me that is pointless. We all know the people who killed him will never be charged and tried. In his e-mail he claims he was working on a big story and needed to go under the radar. Those were his words not mine. The thing we need to ask therefore is what story was he working on. Alex Jones claims it was about the CIA.

People can huff and puff about Alex Jones just like they huffed and puffed about Gary Webb. Gary Webb was right. The CIA was responsible for the US crack epidemic in the 1980’s. I don’t believe he committed suicide by shooting himself in the head twice after he documented everything in his book the Dark Alliance.

The CIA's drug trafficking history has been well established. They are a criminal organization with no public accountability. The sad thing is how their corruption is taking over other agencies as well like the FBI and the ATF. We saw how the ATF was involved in Operation Fast and Furious. That too was under the watchful eye of the CIA.

The fact is Michael Hastings is dead and we need to uncover the story he was working on. Actually it was Paul Watson and the LA weekly that said he was working on a story about the CIA. The New York Daily News quoted one of his books claiming Hastings had received multiple death threats before his "accident." 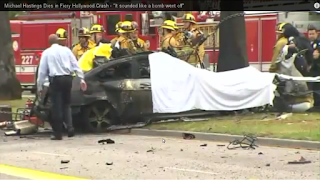