Why Bilderberg is bad 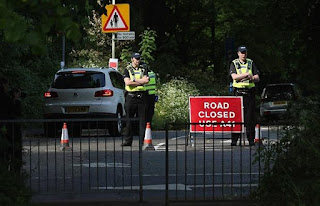 Blog readers have been sending in links about this year’s Bilderberg Group meeting in England. This is where the left meets the right for good and for evil. At first it’s hard to figure out what all the concern is about a few politicians and a few billionaires discussing world peace and financial prosperity. However, with a few clicks of the mouse we can quickly see what’s wrong.

The Rockefellers and the Rothschilds are involved with Bilderberg. That’s a red flag. The goal of the elite group is to establish a one world government. When Kennedy talked about a monolithic conspiracy trying to enslave every man woman and child, this is it. Back then they met in secret. Now they have so much power they can make their meetings public.

The Rothschilds owned Standard Oil Company. They use ruthless tactics to gain a monopoly on the oil market. Something politicians at the time said was a violation of anti trust laws. Now the paid politicians support the oil monopolies which we see gouge consumers at the pump. How many oil companies want to build the Keystone pipeline and the northern Gateway? One. All other companies buy their oil from one who controls the market and sets whatever price they want.

That is Corporate Communism. Large corporations eliminate small business and create a monopoly on a market and thereby destroy the free market while maximizing profits. Amschel Rothschild once said: “Give me control of a nation’s money and I care not who makes its laws.”

Big Corporations and Big Banks funded the Communist Revolution. The Rothschilds funded Karl Marx. This is where the right meets the left in it’s quest for evil. At first glance one would think this is a compete contradiction. The right wing corporations and banks claim to support the free market and claim to oppose Communism. Why then did they fund it? Because they perverted the cause of social justice and high jacked the movement showing clearly that a right wing dictator is no different than a left wing dictator.

In response we see protesters from the left and the right meet for good. The Occupy movement sees the corruption on Wall Street as bad. So does the Tea Party movement that passionately opposes their attempt to rob human rights. Occupy isn’t about the redistribution of wealth. It’s not about the poor being jealous of the rich. It’s about the rich committing investment fraud to gouge consumers and taxpayers. That is what this is about. It is very much a fight for freedom disguised by their lies.

David Rockefeller once said: “We are grateful to the Washington Post, The New York Times, Time Magazine and their great publications whose directors have attended our meetings and respected their promises of discretion for almost forty years. It would have been impossible for us to develop our plan for the world if we had been subjected to the lights of publicity during those years. But, the world is now more sophisticated and prepared to march towards a world government. The supranational sovereignty of an intellectual elite and world bankers is surely preferable to the national auto-determination practiced in past centuries.”

In 1952, Bilderberg member James Paul Warburg testified before the United States Senate and had this to say about the coming New World Order - “”We shall have World Government, whether or not we like it. The only question is whether World Government will be achieved by conquest or consent.”

Christine Lagarde, the head of the IMF, is expected at Bilderberg 2013. The International Money Fund. What can be more suspect than that? We have heard talk about the Amero and the North American Union. These guys want to expand that globally. The problem is, to them the end justifies the means and they want to rob individuals of liberty for the greater good – money in their pocket.

Bilderberg is run at the taxpayers expense. Rich bureaucrats who pay off politicians to help them gain monopolies on the market and rob taxpayers. The big oil companies loved the HST. They love it when big corporations pay no tax and the consumers have to pay all the tax. It is the road to slavery.

Goldman Sachs was involved in hiding the Greek debt so they could get their taxpayer bailout. Goldman Sachs has a huge amount of influence in the US government and has a history of fraud. The Greek financial crisis was the result of investment fraud just like the S&L crisis in the /80’s. What was public money became private then disappeared. Goldman Sachs’ involvement in Bilderberg is a huge concern.

Alex Jones and Infowars are covering the event.

This is a list of some of the "delegates."