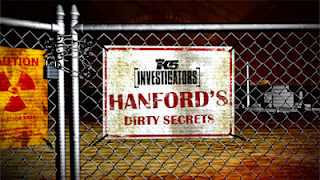 We recently talked about the Nuclear reactor in Washington State that is leaking radioactive waste into the Columbia River. As if the coal pollution in the Columbia River wasn’t bad enough. Turns out King 5 news is diving deeper into the problem and claims Hanford executives has been covering up the seriousness of the leak and that the problem is getting worse. Imagine that. Another private company hiding the truth from the public.

They also talk about how they had no plan in place in the event of a radioactive leak. If the United States can’t figure out what to do with nuclear waste, why are we selling Canadian reactors to India and China? Do we really think they will know what to do with the radioactive waste?

Of course the advertizing campaign is still going well. You can even water ski at night since the radiation will make everything glow in the dark. Hanford’s Dirty Secrets - King 5 news.