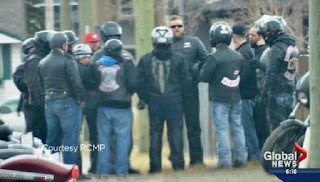 Gotta love those full face helmets. Idiots. The Calgary Sun, the Edmonton Journal, Global and CBC are reporting that police have charged two members of the Malicious Crew Motorcycle Club, which has ties to the Hells Angels, after a man suffering from gunshot wounds on June 3rd was found walking near the town located just west of Red Deer. The man, who is also affiliated with the club, has since undergone surgery and is expected to survive. With friends like that, who needs enemies?

Daniel Huddlestone, 34, and Cameron Monkman, 28, have been charged with attempted murder using a firearm, robbery with a firearm, aggravated assault and other weapons offences. Robbery? Why does that not come as a big surprise?

Insp. Garrett Woolsey said there is no evidence the shooting was ordered by the Hells Angels. Oh brother. If a Hells Angels puppet club did a shooting or committed a murder, there is not a snowballs chance in Hell they didn’t do it without the permission of the Hells Angels. I have no idea why they keep making these kind of ridiculous statements.

Earlier this week, RCMP in Sylvan Lake charged Andrew Waunch, 30, with attempted murder in a separate incident that also happened in the area on June 3. Police say it was a separate incident and although Andrew Waunch knew the suspects from the Malicious Crew charged in the other shooting that happened that night, police aren't saying Waunch is affiliated with the biker club. Things that make ya go hmmm... 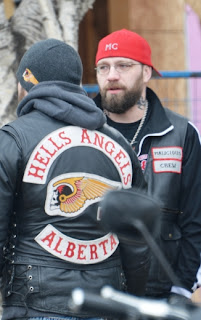