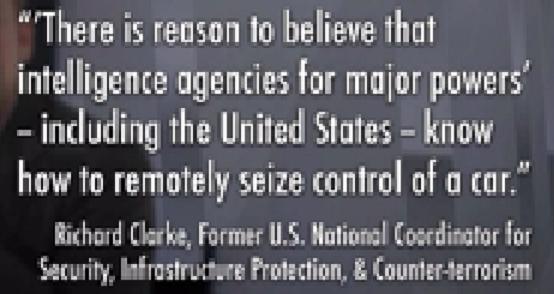 First of all, we’re not talking about Dick Clark from American Bandstand. We’re talking about Richard A. Clarke the former National Coordinator for Security, Infrastructure Protection, and Counter-terrorism for the United States. The Young Turks put out a very interesting youtube video about some of Richard Clarkes’ statements about how easy it is to hack into a car’s control system. He said: “There is reason to believe that intelligence agencies for major powers – including the United States – know how to remotely seize control of a car.”

So first off, this is something he says intelligence agencies are capable of and he is someone who would know. Second he says it’s easy for them to do it: “What has been revealed as a result of some research at Universities is that it’s relatively easy to hack your way into the control system of a car, and to do such things as cause acceleration when the driver doesn’t want acceleration, to throw on the brakes when the driver doesn’t want the brakes on, to launch an air bag. You can do some really highly destructive things now, through hacking a car, and it’s not that hard.”

Obviously, this conversation came up when discussing the murder of Michael Hastings. However, as the host points out, this is a concern for everyone who drives a car. What private citizen is OK with CSIS or the CIA having the power to seize control of your car anytime they want. This is big brother times a thousand.

If this isn’t what happened to Michael Hastings car, then as the host points out, Mercedes should be all over this because it appears their cars are defective and are subject to bursting into flames before it hits a tree and have the engine explode all over the place. If Michael Hastings’s car was not hacked or a bomb placed in it, then Mercedes needs to start doing some safety recalls in a very big way.

However, with regards to the Michael Hastings murder, Richard Clarke claims that US intelligence agencies know how to do it, it’s relatively easy for them to do it and it would be virtually impossible to detect. Not only that but he also concludes that “On the case of Michael Hastings, what evidence is available publicly is consistent with a cyber attack. The problem is you can’t prove it.” So basically if the control system of Michael Hastings car was hacked into, his accident is an example of what would happen.

From the beginning I said it would be pretty easy to hack into his car’s control system. This simply confirms it. In the movie Fast and Furious Six the bad guys had this technology. Only in the movie they had to fire something at the car first.

For me this big Brother stuff is really getting out of hand. In today’s Vancouver Province there was an editorial about big Brother is watching us so get used to it. Yet the whole purpose of the American Revolution was to prevent that from happening. These people are violating their oath of office when they do that. The Charter of Rights protects citizens from unnecessary searches and seizures. That includes warrantless surveillance. They are breaking the law.

I’m personally astounded that more people aren’t interested in the fact that CSIS was directly involved in the Air India attack. Their handler helped plan it and provided the explosives. I know people don’t care about conspiracies but these are claims made by CBC and the RCMP. I’m still in a state of shock.

It’s pretty easy to get a bumper sticker that says 9/11 was an inside job or watch Loose Change 9/11. It’s pretty easy to present the other side as a free speech issue. Yet to see the evidence right there in front of you like in the Air India bombing is very disturbing. My first reaction was OMG it’s true. It really is true. Then comes that sinking feeling of betrayal when your world view changes and you are forced to realize something or someone you trusted has betrayed you.

The movie Explosive Evidence - Experts speak out talks about this. First the movie goes into detail about what controlled demolitions look like and how they are performed. Then it goes into detail about thermite. After that it takes a new perspective and brings in grief counselors to discuss the normal feelings of grief when you realize someone you trusted has lied to you and betrayed you in a very serious way.

CSIS’ involvement in the Air India bombing is very serious. It’s not the smoking gun, it’s Pandora’s box. If they did that, what else did they do? If they are capable of that, what else are they capable of? Indeed Pandora’s boxes reveals the new and improved Iran Contra. A shocking reality that saw Operation Northwoods implemented against the USS Liberty. Yes, it’s treason but hiding from it won’t make it go away.