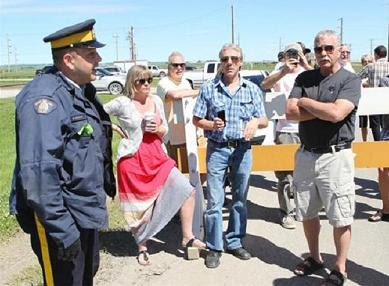 This is exactly why firearm owners oppose gun registration – because as soon as you register your firearm big brother will come and take it away. That’s what happened to the residents of High River south of Calgary. As soon as their town was evacuated because of flooding the police came in and started seizing their firearms. That is so wrong words cannot describe the severity of the offense. Indeed this is why people go to war. When big brother starts going into your home and taking away your private property.

Just like during Hurricane Katrina where the police started seizing firearms from law biding citizens in direct violation of the Second Amendment. We need to sit down and talk about this rationally so when there is a real emergency, these kinds of outrageous infractions of civil liberty don’t turn into an armed conflict.

The public elects the government that makes the laws, which the police enforce. The public pay the police’s salary. Surely we can file a class action laws suit against the RCMP in this case to get some jurisprudence on the matter so if it happens again, the people will be lawfully empowered to use reasonable force to prevent it.

Harper has even said give their guns back. Perhaps Harper does have one conservative bone in his body despite his obsession with corporate communism and being the big brother we all oppose. Then again, who told the police to take them in the first place? We need to answer that question. 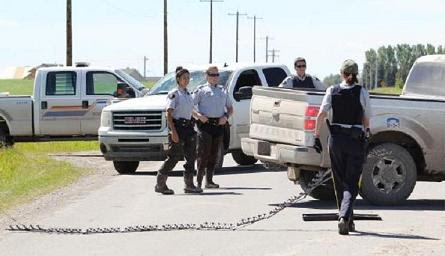 Police set up a roadblock preventing residents from returning home after they stole their private property and even laid down a spike belt to stop anyone from attempting to drive past the blockade. "What’s next? Tear gas?" one resident shouted. Exactly. This is Orwellian. Another resident said “It’s just like Nazi Germany." Exactly. We need to address this now so it doesn’t happen again. This is really serious.

Some of the police were hiding their faces. Under the new law, that results in a ten year prison sentence. The police covering their faces taking away your property is using a disguise to commit a criminal offense. They were going door to door “searching for potential victims” as they unlawfully searched people’s homes and seized their private property. Photos from the crime scene. 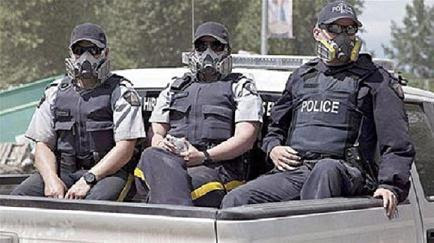