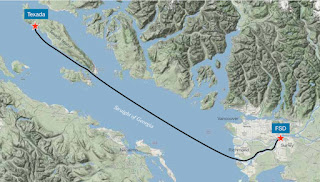 Metro Vancouver's board voted 21-4 to oppose the new coal terminal at Fraser Surrey Docks. It’s just a symbolic measure since they have no say in the matter and the Surrey Docks declare they will proceed unilaterally without public consultation. Yet this timely decision comes as news breaks of Ridley Terminals in Prince Rupert being accused of dumping coal in the ocean. Which coincides with a court case and campaign to stop coal export pollution in waterways in Washington and in Oregon.

BNSF Railways and coal shippers are being sued in US Federal Court for water contamination violations in Washington under the Clean Water Act. So what do they do? They bring their toxic waste to Surrey of course.

We’ve talked about coal pollution recently. How although it was common to use in the past, it is really not progressive for the future. Aside from the toxic pollution to waterways and fish we eat, it has a huge impact on CO2 emissions. Wherever coal is mined, transported and burned, pollution results.

Last weekend I saw a train loaded with coal roll through downtown White Rock right beside the beach. It’s something we don’t normally think about. There goes a coal train, so what? Yet the toxic pollution of our waterways contaminating the seafood we eat as well as the air we breathe is a huge concern.

The court case in Washington where the coal companies are being sued for contaminated water in the Columbia River and the Washington coast and the allegations of coal dumped into the ocean in Prince Rupert act as a wake up call to our moral responsibility. It’s not even a matter of being a tree hugger any more. Polluting the water and contaminating the fish effects the food we eat as well as other commercial industries.

All of a sudden we see that it has adverse effects on other viable and sustainable businesses as well. So it isn’t a matter of making money. It’s a matter of one industry making money on a project that contaminates our water, our air and the food we eat as well as taking money away from other business ventures. Coal is bad business. Surrey is not being progressive for cramming this through without public consultation. 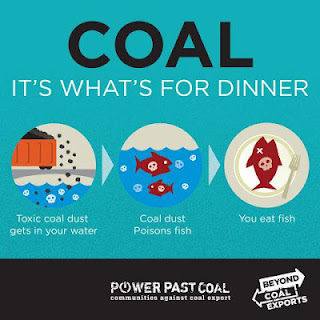