Shootings in Surrey, Coquitlam and Langley, Orcas in Burrard Inlet 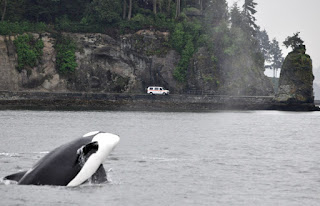 CBC and the Vancouver Province are reporting there was another shooting in Surrey this afternoon at the 14200 block of 108 Avenue. The victim drove himself to the hospital and the police arrested a suspect on site in what they refer to as a targeted attack.

Last night there was a double shooting in Coquitlam. A man and woman are in stable condition after being shot around 11:30 PM at Ballenas Court and Gabriola Drive, near Coquitlam River Park. Police suspect it was a targeted and drug-related shooting but claim they have no reason to think it was gang-related. Ok that’s just plain silly. If it’s drug related, it’s gang related since the gangs are fighting over the drug trade.

On a lighter note, a pod of Orcas were seen in the Burrard Inlet today between Stanley Park and North Vancouver on both sides of Lions Gate Bridge. The Vancouver Aquarium claimed up to eight orcas were spotted. One witness said they stayed in the area for 3 hours. Exciting indeed to see a whole pod of orcas that close to the city. Global and the Vancouver Province have posted some pictures.

Update: CKNW is reporting that Saturday morning two men were shot in Langley near 232 Street and 56 Avenue, RCMP say possibly during a drug deal.