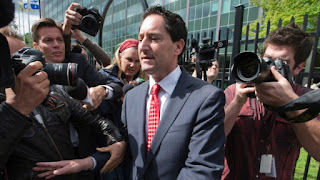 When I first saw the headline about Montreal’s interim Mayor resigning amid corruption allegations, I have to admit I resorted to the rollie eyes and thought not again. The guy replaced the last mayor who resigned amid corruptions allegations. I didn’t realize he was actually arrested. He faces 14 charges, including fraud, conspiracy, breach of trust and corruption in municipal affairs.

CTV is reporting that the charges are related to two real-estate projects that took place between 2006 and 2011, before Applebaum became mayor. The anti corruption commissioner said "these were bribes that influenced a decision, approvals or permit distribution." Police said the transactions being investigated were worth "several hundreds of thousands of dollars." Seemingly this all happened over a decade ago.

Two other Montreal-area public figures were also arrested Monday: Jean Yves Bisson, a former director of permits who worked in Applebaum's west end borough, and Saulie Zajdel, who worked in a ministerial office for the federal Conservatives on ethnic outreach. Zajdel was charged with breach of trust, fraud and corruption.

Since all this drama is tied to corruption in the construction industry in Montreal we can’t forget the allegations against Gilles Varin and QMI Agency’s prediction that the RCMP is close to laying criminal charges against a former Conservative aide to a Quebec senator in connection with the Hells Angels contract to renovate Parliament in Ottawa. What a freaking mess.

I guess they haven’t figured out yet like they have here as long as the bribes are in the form of campaign contributions. They're even tax deductible. Just ask Gateway casinos. Some blog readers think surrey is more corrupt than Montreal because everything is hidden behind the Surrey Development corporation which isn't publicly accountable. Meanwhile, it looks like Harper is going to have his own Big House Crew. 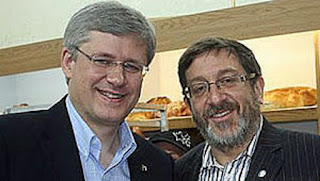