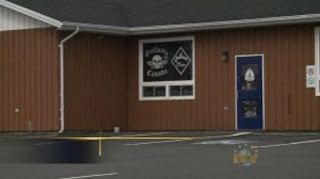 Remember when a couple of hecklers were all freaking out because Alex Caine said the Outlaws already had chapters in Eastern Canada? The rage and denial was indeed suspicious. Well here it is. The RCMP are reporting that the Outlaws arrived in Grand Falls-Windsor August 2012. Ironically enough, they moved into town shortly after Bacchus did.

Bacchus has been in that town since January 2011. 6 months later, the Black Pistons moved in. August 2012, the Black Pistons patched over to become Outlaws. The Hells Angels have already brought drugs and violence to Saint John's NL. Sounds like the Outlaws are going to have a gathering at Grand Falls-Windsor in July. Perhaps there will be a showdown at the OK coral after all. Is that why Bacchus went to Fort McMurray to get help? They’re gonna need a lot more help than that. They’re gonna need some serious time with Dr. Phil. I mean just look at that idiot with eyes tattooed on the back of his head. Flaming idiots alright.

In March there was a home invasion in Grand Falls-Windsor . Two guys in their 20’s broke into a home and assaulted a 63 year old man. Holy crack heads batman that is sleazy. Dwayne Hiscock and Corey Killam face numerous charges including assault with a weapon. Police believe they planned to steal prescription drugs.