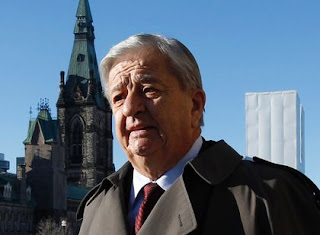 We previously talked about the controversial $9 million renovation project on Parliament Hill tied to the Hells Angels. Well today The Ottawa Sun published an article quoting QMI Agency about how a deceased Conservative lobbyist in Quebec named Gilles Varin was being investigated for his ties to Marvin Put your shirt back on Ouimet. The whacked out Hells Angel from Trois-Rivières accused of committing 22 murders, fraud and laundering the proceeds of crime. Trois-Rivières is an awesome place by the way. Mad Marvin and the Hells Angels are infecting it like a STD.

The Ottawa Sun is reporting that: “Varin even met with Ouimet and a half-dozen other construction company bosses at a suburban Montreal restaurant on Sept. 25, 2008 - under the watchful eyes of police investigators. While Varin bragged of having ‘'easy access’' to political and government officials to help rig contract bids and get government contracts, witnesses said, Ouimet's gang tattoos were seen at the table.”

They are also reporting that “QMI Agency has learned the RCMP is close to laying criminal charges against a former Conservative aide to a Quebec senator in connection with the contract.” They’re pretty good with their facts. This should be interesting. Back when Marvin was arrested Sûreté du Québec Inspector Michel Forget said it was the biggest money-laundering operation ever encountered by the police, and that there was more to come. Indeed, here it comes. 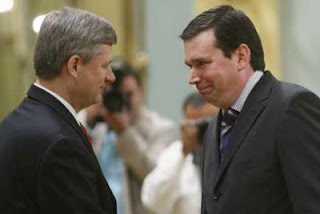 Ya gotta wonder how Christian Paradis fits into this picture. Clear Politics is reporting that there are “allegations that Paradis was involved in influence peddling relating to the construction contract awarded to a Montreal firm for the renovation of Canada’s Parliament building in Ottawa.” Don’t worry. Maybe they’ll get their partner in crime Jacques Leger to hear the case. I wonder if Harper still wants the RCMP to clear any charges with him before they talk to the press about it. That would be somewhat conflicted.