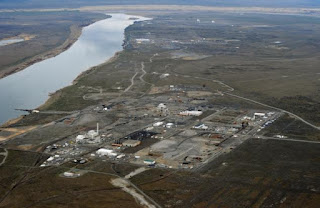 The Vancouver Sun and the Vancouver Province is reporting that a nuclear reactor in south eastern Washington state is leaking radioactive waste. Sadly, this is the site where they made the plutonium for the atomic bomb that was dropped on Nagasaki during the Second world war.

It’s located right beside the Columbia river so that clearly poses a huge concern about radioactive waste leaking into the river and contaminating an entire ecosystem. The media refers to this as the most contaminated nuclear site in the US. Other reports say it’s the most contaminated site in the entire western hemisphere. Yet the spin doctors say there is no immediate heath risk. Maybe not for Washington DC but there sure is health risks for everyone on the West coast.

Looking at this site poses two problems. The first is what to do with radioactive waste. There’s nowhere safe to put it. I suppose we could launch it into space and aim it at the sun but that would be pretty costly. Heaven forbid we screw around with the sun.

February the Governor said Six tanks at the Hanford Nuclear Reservation in southeast Washington state are leaking radioactive waste which raises serious questions about integrity of all single tanks. 150 - 300 gallons a year are leaking. That poses an immediate risk. That’s just from one tank.

Hanford's tanks hold some 53 million gallons (200 million litres) of highly radioactive waste — enough to fill dozens of Olympic-size swimming pools — and many of those tanks are known to have leaked in the past. An estimated 1 million gallons (3.8 million litres) of radioactive liquid has already leaked there. In February CBC reported that the tank was leaking plutonium.

So the first problem we need to discuss is radioactive waste. After the meltdown in Japan German citizens have been protesting the use of Nuclear energy in their country. Yesterday 60,000 protesters in Japan objected to restarting the reactor after the Fukushima disaster. A recent poll found that around 70 percent of Japanese want to eventually phase out atomic energy all together.

Canada selling nuclear reactors to China or India is not forward thinking. For two reasons. First is the radioactive waste. The second is the ability to make nuclear weapons from the plutonium it produces. Canada was the one who gave India the technology for their nuclear tests. Selling Canadian reactors is a huge concern. Harper just did away with Canada’s nuclear non-proliferation policy. Another step backwards for the planet.

Personally I’m not opposed to hydroelectric dams. The Cleveland Dam has been very beneficial to Vancouver. The main problem with dams on coastal rivers is spawning salmon. They built the fish hatchery to address that problem. It’s a nice place to visit on Capilano just below the base of Grouse Mountain.

The troubled San Onofre nuclear power plant on the California coast is closing after an epic 16-month battle over whether the twin reactors could be safely restarted with millions of people living nearby, officials announced Friday.