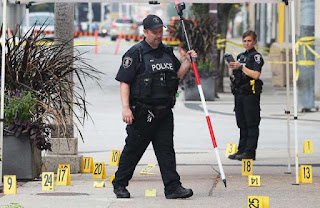 The Windsor Star is reporting that "A 20-year-old male is dead from gunshot wounds suffered in a downtown Windsor homicide that investigators are describing as a “targeted incident.” Windsor police responded to reports of shots fired around 2:40 a.m. at the intersection of Ouellette Avenue and University Avenue East. Officers arrived to find the male victim with critical injuries. Also shot was a 19-year-old female from Windsor, whose injuries were not life-threatening. The male victim - described as a Windsor resident with ties to the Toronto area - succumbed to his wounds."