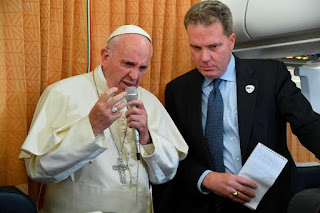 CBC is reporting that "The Vatican has called the sex abuse described in a grand jury report in Pennsylvania criminal and morally reprehensible. The grand jury on Tuesday released the findings of the largest-ever investigation of sex abuse in the U.S. Catholic Church, finding that 301 priests in the state had sexually abused minors over the past 70 years. In a statement released late Thursday, Vatican spokesperson Greg Burke said those acts were betrayals of trust that robbed survivors of their dignity and faith."

70 year is a long time but 301 priests, that is astounding. One is heinous but 301 in a single State, that is a pandemic. That's the number of priests involved not the number of victims. CNN is reporting that the juror's report states more than 300 priests have been accused of sexually abusing more than 1,000 child victims.

"We believe that the real number of children whose records were lost or who were afraid ever to come forward is in the thousands," the grand jury report says. "Priests were raping little boys and girls, and the men of God who were responsible for them not only did nothing; they hid it all. For decades. Monsignors, auxiliary bishops, bishops, archbishops, cardinals have mostly been protected; many, including some named in this report, have been promoted."

Time Magazine is reporting that "The Pennsylvania report comes over 15 years after reporting in the Boston Globe propelled sexual abuse in the Catholic Church to the national spotlight. “There’s certainly nothing particularly unusual about the state of Pennsylvania. If it’s happening in rural towns in Pennsylvania, it’s basically happening everywhere." That is absolutely sickening.

I'm not one to say your doctrine is wrong but it does support the theory that celibacy is not normal. I will say that this pandemic of abuse is clearly wrong. That much is indisputable.