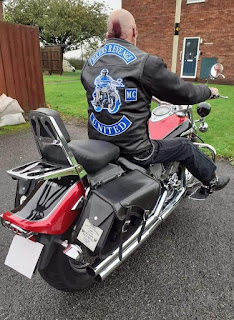 Bikers Revenge MC United is a NEUTRAL MC Club established this summer by former 1%ers from USA, UK and Canada together with HELP from TBM Nation.

Bikers Revenge MC United is a Brotherhood for Old School Bikers who want to LIVE and RIDE, and NO longer have any interest in being associated with todays new generation in the MC World.

Bikers Revenge MC United will be of NO threats to any MC Club around the World and will also show Government's around the World, that MC Clubs NOT are STREET GANGS and have NOTHING to do with so-called organised crime.

UNITE INSTEAD OF FIGHT - THAT'S THE SPIRIT OF BIKERS REVENGE MC UNITED.

This little Patch will be seen on the FRONT of ALL Members vest's INSTEAD of the wellknown 1% Diamond - UAO (UNITED AS ONE).