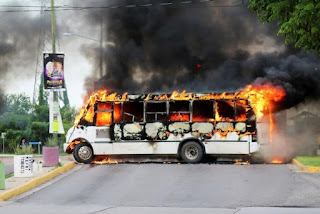 The LA Times is reporting that "A daring operation to capture one of Mexico’s most powerful drug lords failed disastrously when armed cartel members launched a deadly counterattack, laying siege to the northern city of Culiacan and taking several security officers hostage. Authorities on Thursday briefly detained Ovidio Guzman Lopez, a leader of the powerful Sinaloa cartel and the son of notorious drug boss Joaquin El Chapo Guzman. But they ultimately freed him and retreated, a move Mexico’s leaders defended as necessary to save lives."

"At least eight people died in a series of gun battles across the city, including one civilian, one member of the National Guard and five attackers. At least 16 people were injured."

ABC is reporting that "An intense gunfight with heavy weapons and burning vehicles blocking roads paralysed the capital of Mexico's Sinaloa state and forced police to release the recently arrested son of Joaquin El Chapo Guzman." Free El Chapo and Arrest the CIA. 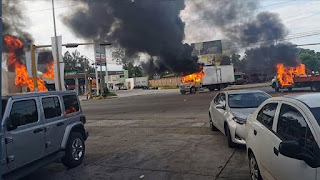 Donald Trump pardon's El Chapo. Not, but he should.

Posted by Dennis Watson at 8:07 AM