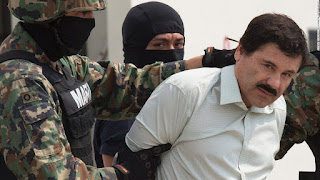 No Donald Trump hasn't pardoned El Chapo yet but he should. In exchange for his testimony against the CIA at a congressional hearing about Operation Fast and Furious. Think about it. What do Pablo Escobar, Manuel Noriega and El Chapo all have in common? They all sold drugs for the CIA and they were all screwed over by the CIA for doing what they were told to do. Oliver North told the court he was authorized to do everything that he did. The only difference is that they made him a Fox TV News host while the other three got completely screwed over.

In February 2017 Pablo Escobar's son claimed his father sold drugs for the CIA. Big surprise. All through that whole Narcos Netflix series, it's pretty obvious every time the DEA tried to arrest Pablo Escobar, the CIA were there running interference because Pablo was selling drugs for them. Gary Webb was right. The CIA were indeed responsible for the US crack epidemic in the /80's. The CIA have been deeply involved in drug trafficking since Vietnam, all through Iran Contra and even today in Afghanistan and in Mexico through Fast and Furious.

The CIA created and betrayed Pablo Escobar just like they did Manuel Noriega. After Pablo Escobar went to jail, the CIA started using the Cali cartel instead of the Medellin cartel. Colonel Edward P. Cutolo testified that in Operation Watchtower the planes loaded with cocaine landing in Panama from Bogata were met by Col. Tony Noriega and CIA Agent Edwin Wilson. Tragically Noriega passed away this year after serving the rest of his life in prison. Trump should have pardoned Noriega in exchange for his testimony against Oliver North and the CIA.

Fast forward to 2011. In Operation Fast and Furious the ATF were selling guns to the Mexican cartel and bringing back tons of cocaine into the United States as payment. It was a CIA operation. The judge Bonner story taught the CIA that the only way to shut up the DEA was to infiltrate it. That's exactly what they did to the ATF.

So Operation Fast and Furious gets exposed and the CIA screw over El Chapo after helping him rise to power just like they did Pablo Escobar and Manuel Noriega. As I spotlight corruption in Honduras I'm not going to touch the MS 13. Their business is none of my business. I'm just going to highlight the CIA election fraud there to aid and abet their drug trafficking in Honduras just like Major Charles McKee tried to do with the CIA's drug trafficking in Lebanon.

The CIA is a criminal organization that makes the Hells Angels look like boy scouts. Their mandate is murder to get gain and their method of operation is through deception and disinformation. They lie, consistently, about everything they do. America isn't bad, the CIA is. The US Constitution is good. The CIA are enemies of the US Constitution. Buyer Beware.