Shattered confidence in the BC justice system 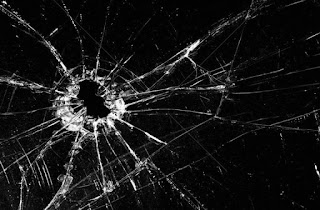 The Vancouver sun is reporting that "The B.C. Court of Appeal has dismissed a bid by former notary Rashida Samji to throw out her criminal conviction for fraud relating to a $110-million Ponzi scheme that resulted in a six-year sentence."

"The appeal court concluded that a stay under the Charter of Rights was not warranted either, as Samji had not answered to society at large for her conduct, and a stay would likely cause the public to lose confidence in the integrity of the justice system.” Now that is interesting.

A stay in Jamie Bacon's charges has indeed caused the public to lose all confidence in the integrity of the BC justice system. However, normally the court doesn't care about public opinion. The court has traditionally seen itself better than the public and beyond reproach. They claim the court is there to interpret the law and the public is not learned in the law like they are so the public is stupid and the court has no need to explain itself to the public. As a result there is zero public accountability in the BC justice system which has been the subject of many signs, t-shirts, billboards and protests over the years.

I wouldn't say that this recent decision is president making but it is a breath of fresh air. When I first started this blog people said I was not allowed to criticize judges who made bad decisions. I disagreed and cited former judge Wallace Craig who said not only is it the public's right to criticize bad judicial decisions, it is a moral duty.

I have indeed tested the waters so to speak on the Internet, outside courthouses and within the court of public opinion. Neil Hall's Book The Hells Angels and the Million Dollar Rat ran a picture I made of Peter Leask with bugs bunny ears on a Looney tune background wherein he stated that the author of the Gangsters out blog believes Peter Leask should be hanged for treason. I do. He was a lunatic and the fact that we had to wait for him to age out and face mandatory retirement at the age of 70 was a crime against humanity.

Peter Leask is gone but now we are left picking up the pieces of the public's shattered confidence after the murder charges against Jamie Bacon were stayed when he was the one that orchestrated the hit. I realize that the trial delays in that case were significant and that the police and the crown are primarily to blame for obsessing with covering up the police misconduct in that case. However, excessive trial delays display a recurring problem within the courts. We can only hope that Jamie Bacon will be convicted in Eileen Mohans wrongful death suit like OJ was. Are the red and white still going to support him then? Let's hope not. I doubt they'll want to pay those costs and damages.

Global reported that "The reasons for issuing the stay of proceedings have been sealed and must remain so, Madam Justice K.M. Ker wrote in her ruling." Yeah? Why? Who is she covering for? Herself or the police? Perhaps both. Although trial delays in that case were indeed excessive, there is absolutely no reason whatsoever to maintain a publication ban on the reasons for her decision. None whatsoever. The purpose of publication bans is to ensure the accused gets a fair trial. To my knowledge, the stay of charges is final. There is no appeal process for the staying of charges. That means the publication ban on the reasons for the stay is over. To state otherwise is a criminal act and a gross violation of the Charter of Rights.

If the court does in fact give a rats ass about the public's confidence in the justice system, then it must obey the law it is paid with tax dollars to uphold and not break the law by hiding things from the public who pay their wages and elect the governments that make the laws the courts are paid to enforce. The publication ban on the reasons for Jamie Bacon's stay must be challenged because it is wrong, wrong, wrong.

This Iron Curtain effect brings us back to the beginning of the Jamie Bacon trial in New Westminster. Back in March 2013 part of the Jamie Bacon trial was held in camera. That means no public or press was allowed in. That was absurd. When the court issues a publication ban they are always time sensitive. When the trial is over the publication ban expires.

The only publication bans that don't expire are ones that protect the identity of witnesses or victims. All other evidence may be published. That is why the public and the press are allowed in when a publication ban is in effect. So they know what they can report on when the ban has been lifted. In camera trials are dodgy as F*ck. While I was standing outside the courthouse with a sign objecting to the secret trial I was told it was the prosecution that asked for the hearing to be in camera not the defense. They were obviously covering up the police misconduct. 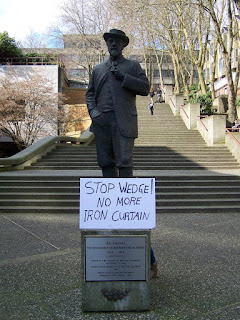 The continued publication ban on the reasons for the stay in Jamie Bacon's charges is illegal and must be challenged in court. If the court cares about the public's confidence in the integrity of the justice system, then that publication ban must be lifted. It's that simple.

Prosecutors to appeal the stay on Jamie Bacon’s charges