US suports election fraud and drug trafficking in Honduras 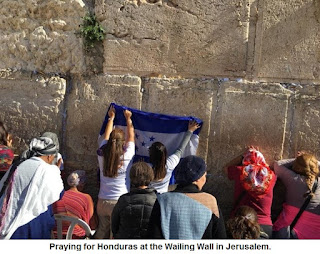 The LA Times is reporting that "In what critics call a weakening of U.S. support for democracy in Latin America, the Trump administration appears to be prioritizing concerns about illegal immigration and drug trafficking from Honduras over the country’s violent and flawed election process." The CIA and MI6 overthrew democracy in Iran during Operation Ajax.

In this case the rationalization for the lie has been to confront drug trafficking. The CIA has told Donald Trump that the opposition suports drug trafficking while the corrupt president who refused to step down does not. That is a bold faced lie just like the Hillary Clinton sponsored coup in Honduras back in 2009. This lie is nonpartisan. Manuel Zelaya was putting pressure on the drug dealers. That's why the CIA got rid of him in 2009. Then they claimed he was drug trafficking when he wasn't. They were. Just like in Afghanistan.

The Intercept is reporting that "The Honduran Minster of security, who was intimately involved in solidifying the 2009 coup, is tied up in drug trafficking, according to testimony from a Mexican drug-trafficker-turned-DEA-informant in U.S. court."

Insight Crime is reporting that "Colombian drug trafficking gangs changed their routes to Honduras just days after the coup and turned it into the principal handover point for cocaine to Mexican cartels." Operation Fast and Furious revisited. Say hello to the new boss, same as the old boss. I'll get on my knees and pray we dont get fooled again.

What do you think the Americans do with the cocaine they seized in Honduras? The CIA brings it to Florida to have it destroyed. Why would they bring it to Florida to destroy it? Why wouldn't they destroy it at source? Because they aren't destroying it. They are selling it on the streets.

The CIA have been actively involved in the Honduran drug trade since Iran Contra. If Donald Trump wants to reduce drug trafficking he needs to pull the CIA out of Honduras and put in the DEA. During the whole Narcos netflix series it became clear that every time the DEA tried to bust Pablo Escobar, the CIA prevented them until they finally ditched Pablo Escobar and started using the Cali Cartel instead of the Medellin cartel.

This is how the CIA created the Communist revolution in Cuba by supporting the corrupt Batista government. The people in Honduras have been protesting against Juan Orlando Hernández's corruption since 2015 when it became known he was taking money from hospitals and medicine to use for his own political purposes. He even went so far as to replace medicine with flour pill placebos. Teachers go unpaid as American aid is getting pocketed by corrupt politicians.

Honduras held a democratic election and the challenger won. Right before the vote counting was final they stopped the live coverage of the vote counting and said the military was going to bring in the remaining ballots from the rural areas and bring them to a central location to be counted by the corrupt president's supporters. Huge discrepancies were reported and the results mysteriously changed. Now Donald Trump says confronting illegal immigration and drug trafficking in Honduras is more important than supporting democracy which is the root of the lie that the Hillary Clinton backed CIA has told him.

Meanwhile back on the ranch, look at the absurd coverage this fraud is getting in Communist China. It is true that the people have been protesting against the election fraud tied to Juan Orlando Hernández. The Communist paper spins it into a struggle between the bourgeoisie and the workers. Their conclusion is "For the working people of Honduras, there is only one solution: break with capitalism and build a new society for all, a socialist society. Down with JOH and imperialism!" WRONG! That would be like jumping out of the frying pan into the fire.

If you want to protest election fraud in Honduras use a Honduran flag not a Communist flag. Communism and the CIA are both bad because they go hand in hand one with the other. 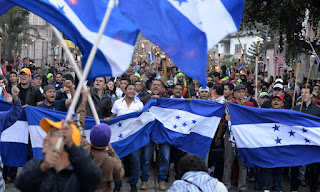 Remember the CIA have been actively involved in drug trafficking through Iran contra since Vietnam. Their mandate is murder to get gain and their method of operation is deception. They lie about everything. They are trying to spin the election fraud by claiming that JOH won the recount when he didn't. They are trying to claim that the whole population that have been protesting JOH since his corruption scandal in 2015 are Communist rebels. To support this ridiculous claim JOH's sister Hilda just died in a helicopter crash and the CIA are blaming the murder on FARC. Only FARC is in Colombia not Honduras and FARC has gone mainstream and are getting paid by the Colombian government so that is yet another CIA lie that just does not make sense.

JOH did not take 43 percent of the vote. That is a bold faced lie. The challenger was centre left. He was not a Communist. The public has been protesting JOH corruption since 2015.

Posted by Dennis Watson at 5:09 AM