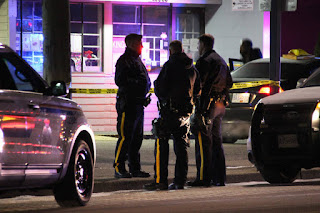 The Georgia Straight is reporting that "The Mounties say that a 34-year-old Surrey man faces four serious criminal charges following a brazen shooting on December 23. Son Thai Lu has been booked on attempted murder, aggravated assault, assault with a weapon, and pointing a firearm after a man was fired upon in a coffee shop in the 13500 block of 105th Avenue. The victim is recovering from serious injuries. The gunman fled the scene of the crime in the busy Surrey City Centre neighbourhood."

“The shooting appears to have been motivated by a disagreement between the two men,” Cpl. Scotty Schumann said in a news release. “There is no known link to the ongoing Lower Mainland gang conflict and we’re thankful no one else was injured.”