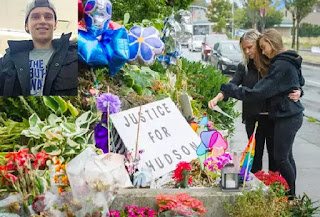 The Canadian Press is reporting that "Charges of aggravated assault and assault with a weapon have been laid against an RCMP officer after the fatal shooting in 2015 of a young man in Surrey, B.C. Const. Elizabeth Cucheran is scheduled to make her first appearance in provincial court on Jan. 9, British Columbia's Prosecution Service said Tuesday."

We broke this tragic story when it happened. Hudson was running from a mob of kids late at night at the same park Dario Bartoli was murdered in. He ran straight to the police station screaming they're trying to kill me. A female officer orders him to stop. He is too frantic to obey her comand so she pulls out her gun and accidentally shoots herself. She radios for help saying she has been shot later admitting that she shot herself. More cops arrive on the scene and shoot Hudson dead. It was a mistake. They thought he shot a police officer. He did not. He was unarmed running to the police for help and they shot him dead. Now the female officer who accidentally shot herself is being charged while the alpha dogs that killed Hudson aren't. How is that justice? 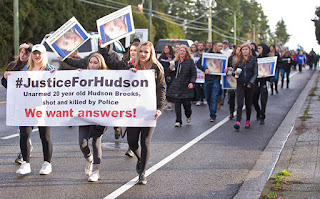