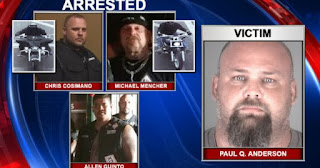 Time magazine is reporting that "Authorities outside Tampa, Florida, are rushing to stop a potential war between rival motorcycle clubs after a local leader was assassinated on Thursday night. Pasco County Sheriff Chris Nocco announced the arrest of three suspects Friday in the slaying of Paul Anderson, the 44-year-old president of a local chapter of the Outlaws motorcycle club. Authorities believe the president of a rival club, the 69ers, tapped on the window of Anderson’s truck while it was stopped at a red light and then opened fire, killing Anderson."

The Tampa Bay Times is reporting that "Detectives arrested three motorcycle gang members on charges that they executed the leader of a rival gang, saying they fatally shot him in his truck as he sat at a red light in the middle of rush hour traffic. Pasco Sheriff Chris Nocco said he fears that Thursday’s public burst of violence could ignite a war between local chapters of two infamous motorcycle gangs: the Outlaws and the 69ers Motorcycle Club."

Life of a Rider is reporting that Paul Anderson was president of the Cross Bayou Chapter of the Outlaws. "Anderson was shot by Christopher Brian Cosimano, 29, the president of the 69’ers, the motorcycle club. Michael Dominick Mencher, 51, the other motorcyclist, did not shoot Anderson. He was only there to help in case something went wrong. Allan Burt Guinto, 26, the third member of the club, was present to ensure a clean getaway." Sh*t be cray.

Posted by Dennis Watson at 1:34 PM