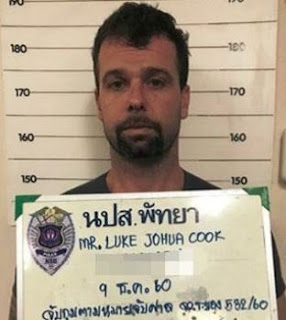 The Sydney Morning Herald is reporting that Police have arrested an Australian Hells Angels member and bar owner named Luke Joshua Cook over an attempt to smuggle 500 kilos of crystal meth from a Chinese supplyer into a Thai port.

"Cook, owner of the Piss Stop Bar in Pattaya, was convicted in 2016 of helping Australian kick-boxer and former Sydney businessman Antonio Bagnato flee Thailand after he murdered Wayne Schneider, another Hells Angels member and prominent figure of Sydney's underworld, in 2016."

Exactly what I said. They killed their own guy so someone else in the club could take over his drug business. AFFA not. Antonio Bagnato was convicted of murdering HA drug kingpin Wayne Scheider and Luke Joshua Cook was convicted of helping the shooter escape. Then all of a sudden he takes over the business and gets caught with 50 kilos of crystal meth. Big surprise. No L&R there. It's all about the money. Stop the Greed. Find some self respect.

This is the dark business Thaksin warned about. 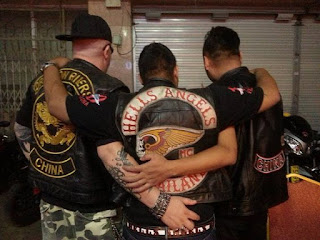 Note the bottom rocker on the white guy in the picture supporting the Thai Hells Angel. It says China. He's from the Dragon Riders MC which was established in 2011 on mainland China.

Update: Although Luke was recently charged, the allegation comes from 2015. Luke was suspected of receiving US$10 million from Wayne in early 2015 to buy 500 kilograms of crystal methamphetamine, or "ice", in international waters and store it in Thailand for later smuggling into Australia. So here we have someone who worked for Wayne help the shooter that killed him.