BC NDP decide to proceed with the Site C Dam 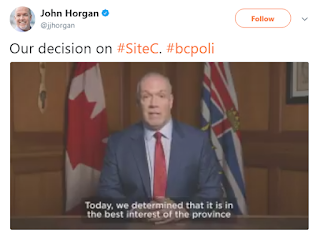 John Horgan announced on Twitter that the NDP Government has decided to proceed with the Site C Dam. Can we al least get rid of SNC-Lavalin and get it on budget so we stop their perpetual tax fraud? SNC-Lavalin is the root of the problem.

Mike Smyth reported that "It was Clark who solemnly vowed - at the memorial service for the late former premier Bill Bennett, no less - to push the Site C dam past the point of no return. And that’s exactly what she did. Horgan was forced to admit Clark had cooked an omelette he simply couldn’t unscramble." IE it would cost too much to cancel it.

Ray Roch wrote into the Vancouver Province and said cancelling the site C Dam is no longer feasible. It would cost $4 billion to cancel it. For the same money it could be completed. At least once it's completed you have something to show for it that makes money for the province.

Hydroelectric power is a lot better than nuclear reactors. The primary concern is the massive over budget costs. Once again SNC-Lavalin is the root of the problem.

Keep SNC-Lavalin out of Surrey

What the provincial government needs to do it is confront the BC Hydro fraud that is creating a tsunami of deferred debt because Independent Power Producers sell power to the public company at above market rates. We need to get rid of the IPPs and contract that work back in to the public company so tax payers don't get ripped off billions of dollars ever year. That's what Norm Farrell's new campaign is all about.